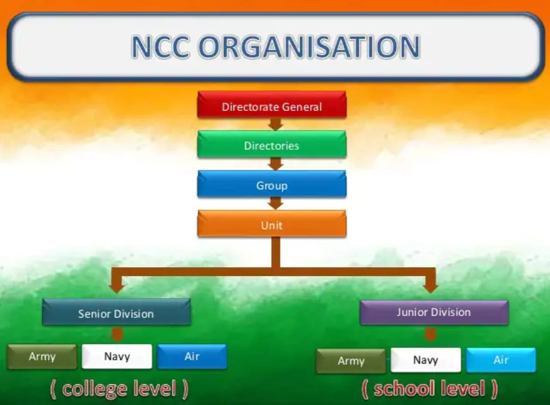 The National Cadet Corps (NCC)is the Indian military cadet corps with its head Quarters at New Delhi. The Ncc in India was formed with the national cadet corps Act of 1948. It was raised on 15 July, 1948. National Cadet Corps is a Tri-Service organization, comprising the Army, Navy and Air Force, engaged in grooming the youth of the country into disciplined and patriotic citizens . It is open to school and college students on voluntary basis. The National Cadet Corps in India are a voluntary organization which recruits cadets from high schools, colleges and Universities all over India. The Cadets are given basic military training in small arms and parades. The officers and cadets have no liability for active military service once they complete their course but are given preference over normal candidates during selections based on the achievements in the corps.

Aims of NCC
1-To develop qualities of character, courage, comradeship, discipline, leadership, secular outlook, spirit of adventure and sportsmanship and the ideals of selfless service among the youth to make them useful citizen.
2-To create a human resource of organised trained and motivated youth to provide leadership in all walks of life including the Armed Forces and be always available for the service of the nation.
Oath
"I do hereby solemnly promise that I will serve my motherland most truly and loyally and that, I will abide by the rules and regulations of the National Cadet Corps. Further under the command and control of my commanding officer I will participate in every camp most sincerely and wholeheartedly".
Pledge
We the cadet of the national cadet corps, do solemnly pledge that we shall always uphold the unity of India. We resolve to be disciplined and responsible citizen of our nation. We shall undertake positive community service in the spirit of selflessness and concern for our fellow beings.

NCC History
The NCC in India was formed with the National Cadet Corps Act of 1948. It was raised on 15 July 1948 The National Cadet Corps can be considered as a successor of the University Officers Training Corps (UOTC) which was established by the British in 1942. During World War II, the UOTC never came up to the expectations set by the British. This led to the idea that some better schemes should be formed, which could train more young men in a better way, even during peace times. A committee headed by Pandit H.N. Kunzru recommended a cadet organization to be established in schools and colleges at a national level. The National Cadet Corps Act was accepted by the Governor General and on 15 July 1948 the National Cadet Corps came into existence. During the 1965 and 1971 wars with Pakistan, NCC cadets were the second line of defence. They organised camps to assist the ordinance factories, supplying arms and ammunition to the front, and also were used as patrol parties to capture the enemy paratroopers. The NCC cadets also worked hand in hand with the Civil Defence authorities and actively took part in rescue work and traffic control. After the 1965 and 1971 Indo-Pak wars the NCC syllabus was revised. Rather than just being the second line of defence, NCC syllabus laid a greater stress on developing qualities of leadership and Officer-like qualities. The military training which the NCC cadets received was reduced and greater importance was given to other areas like social service and youth-management. NCC Organisation
The National Cadet Corpos is headed by a Director General, an Army Officer of the rank of Lieutenant General, who is responsible for the functioning of the National Cadet Corps in the country through the National Cadet Corps Headquarters situated at Delhi. At the State Level, the country has been divided into 17 Directorates covering all States and Union Territories. Each of the State National Cadet Corps Directorate Headquarters controls two to fourteen Group Headquarters. While Directorates are commanded by Brigadiers or their equivalents, the Groups are commanded by Colonels or equivalents from the Air Force and the Navy, NCC Units are commanded by Major/Lieutenant Colonel or their equivalents.
NCC Flag
NCC Flag Contains NCC Crest in gold in the middle, with the letters "NCC" encircled by a wreath of seventeen lotus with a background in Red, Blue and Light blue. Red depicts the Army, Deep Blue depicts the Navy and Light Blue depicts the Air Force. The seventeen lotuses represent the 17 State Directorates. "Unity of Discipline" (Ekta aur Anushasan) is written at the bottom of the NCC Flag.
Enrollment
Induction into the NCC is on a voluntary basis and students both Boys /Girls can join at tha age of 13 years in junior Division (JD) / Junior Wing (JW)(Generally class eight to Tenth and in Senior Division (SD)/Senior Wing (SW) from eleventh class onwoards.)
NCC SONG
HUM SAB BHARTIYA HAI, HUM SAB BHARATIYA HAI APNI MANZIL EK HAI, HA HA HA EK HAI, HO HO HO EK HAI, HUM SAB BHARTIYA HAI KASHMIR KI DHARTI RANI HAI, SARTAJ HIMALAY HAI SADIYON SE HAMNE ISKO APNE KHOON SE PALA HAI DESH KI RAKSHA KI KHATIR, HUM SHAMSHEER UTHA LENGE HUM SHAMSHEER UTHA LENGE BHIKRE BHIKRE TARE HAI HUM LEKIN JILMIL EK HAI HA HA HA HA EK HAI, HUM SAB BHARTIYA HAI MANDIR GURDWARE BHI HAI YAHAN, AUR MASZID BHI HAI YAHAN GIRJA KA GHADIYAL KAHIN MULLA KI KANKHI HAI AJHA EK HI APNA RAM HAI, EK HI ALLAH THALA HAI EK HI ALLAH THALA HAI RANG BIRANGE DEEPAK HAI HUM, LEKIN MAHAFIL EK HAI HA HA HA EK HAI, HO HO HO EK HA HUM SAB BHARTIYA HAI, HUM SAB BHARTIYA HAI 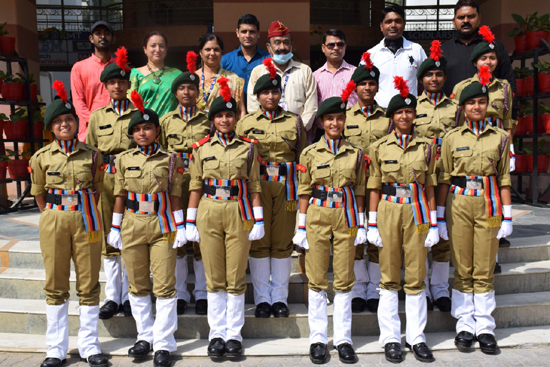 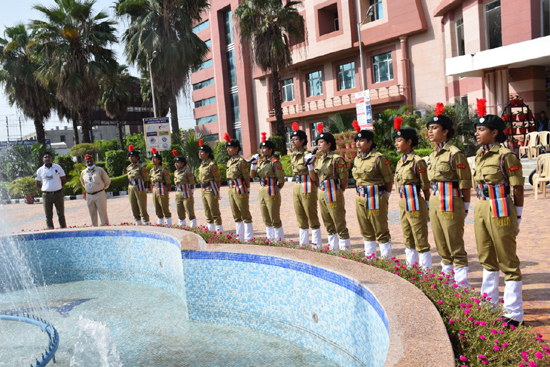 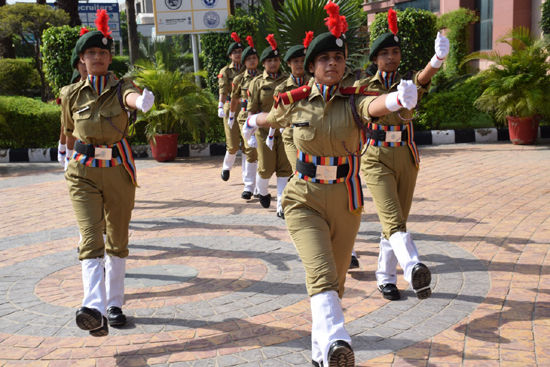 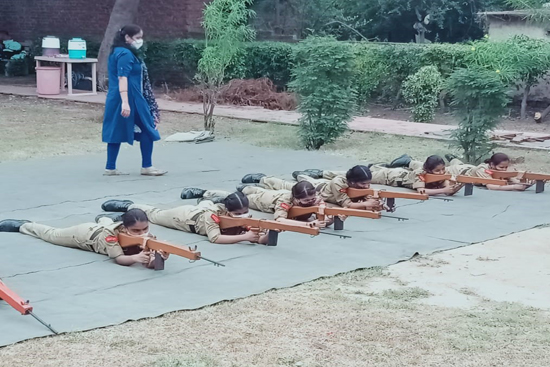 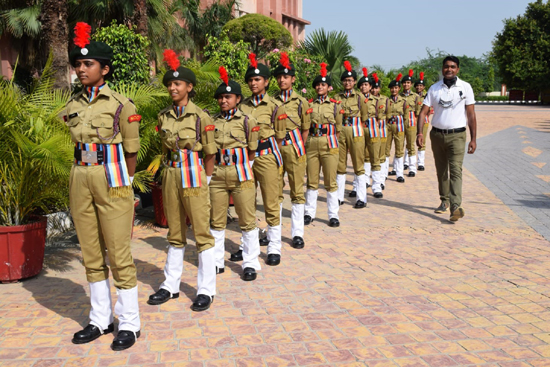 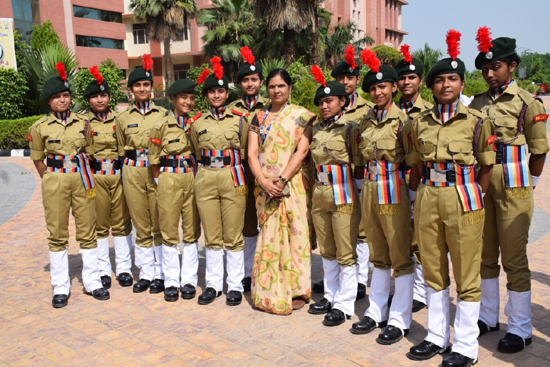 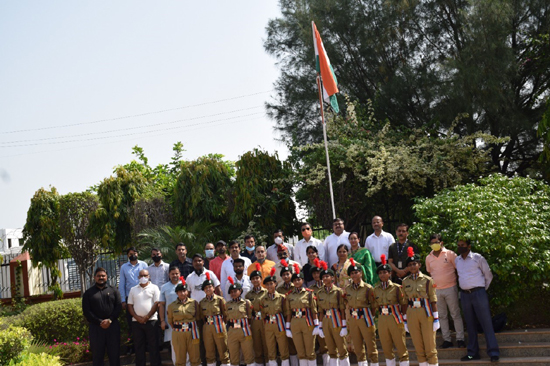 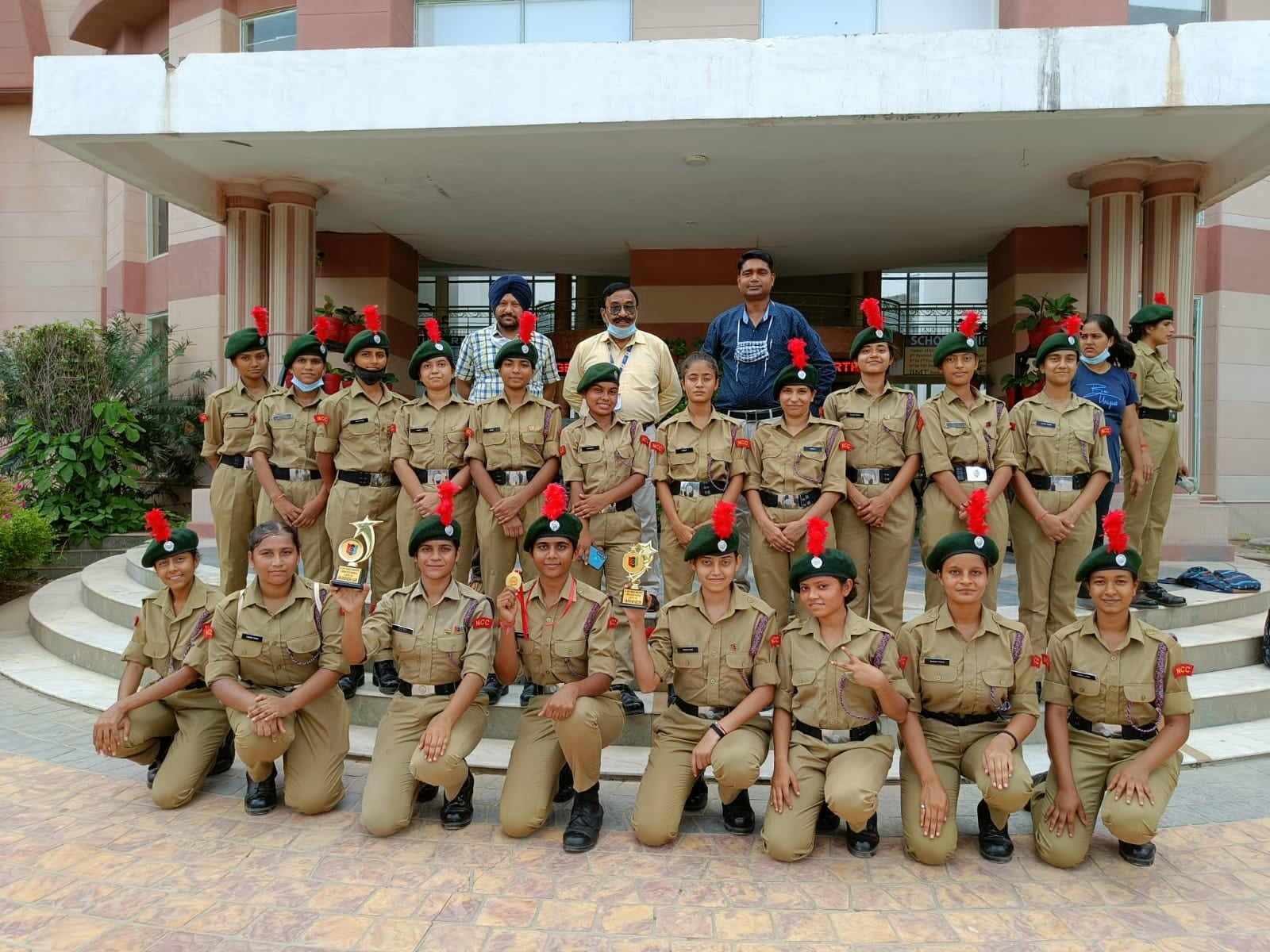 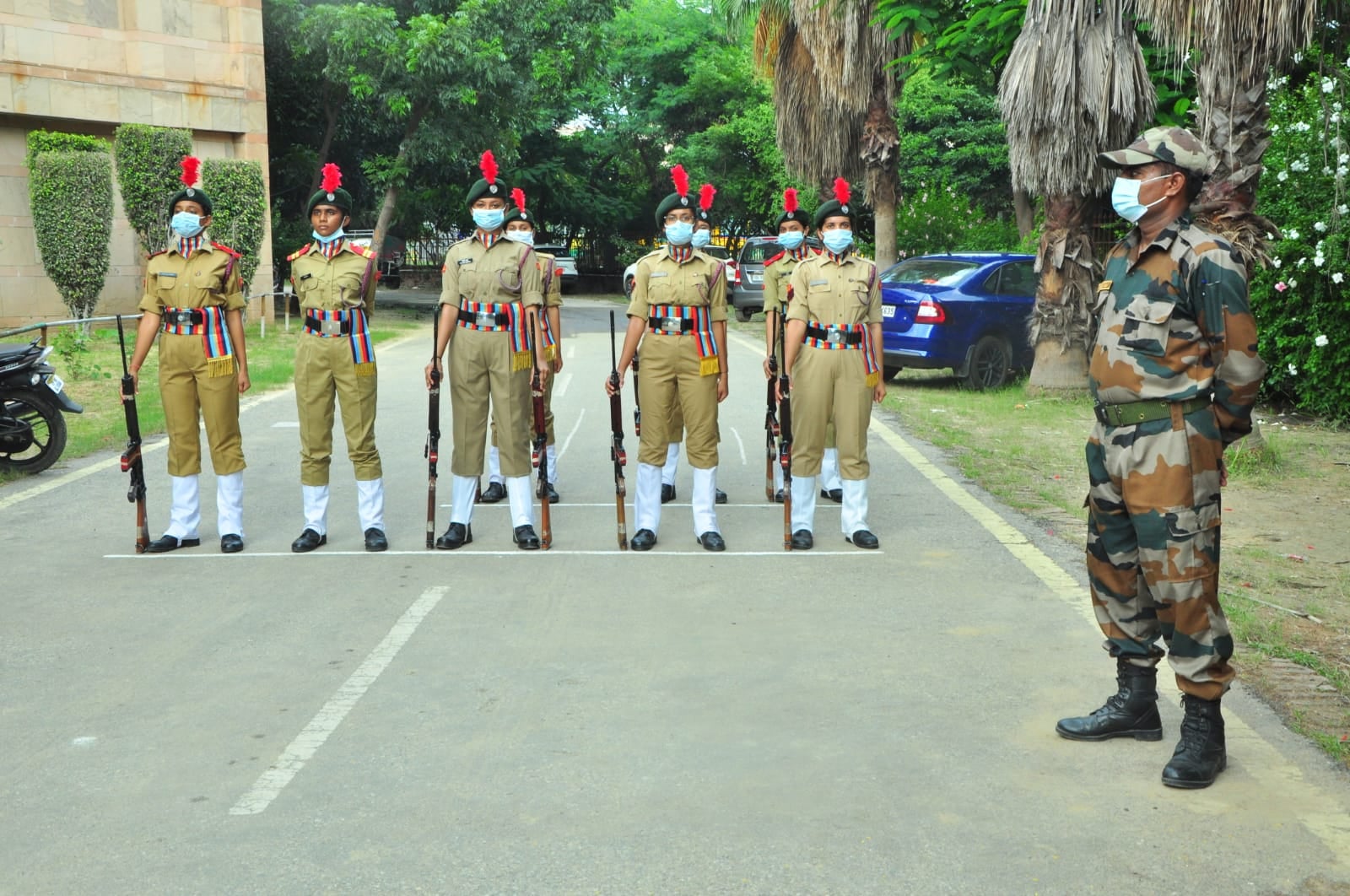 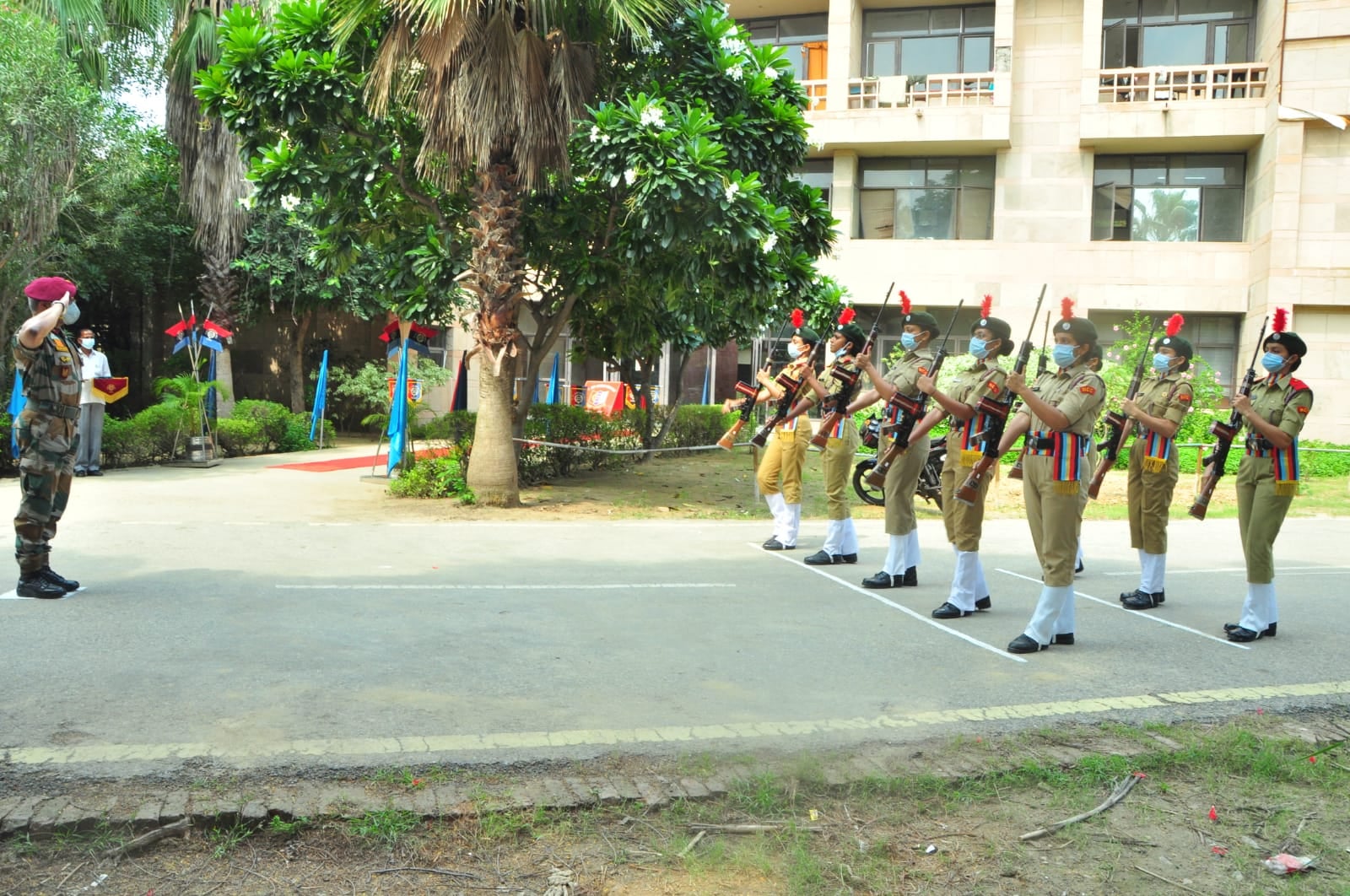 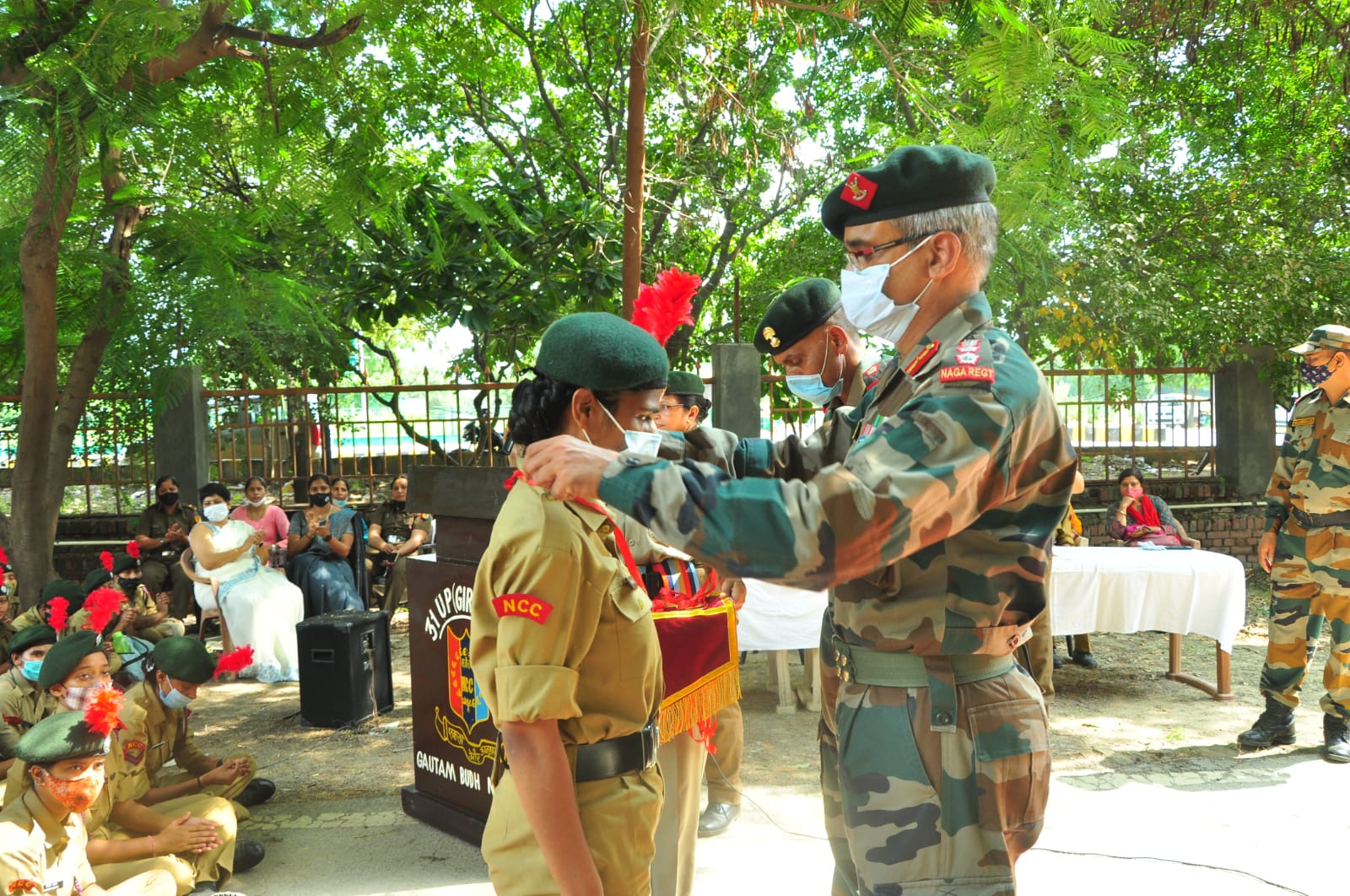 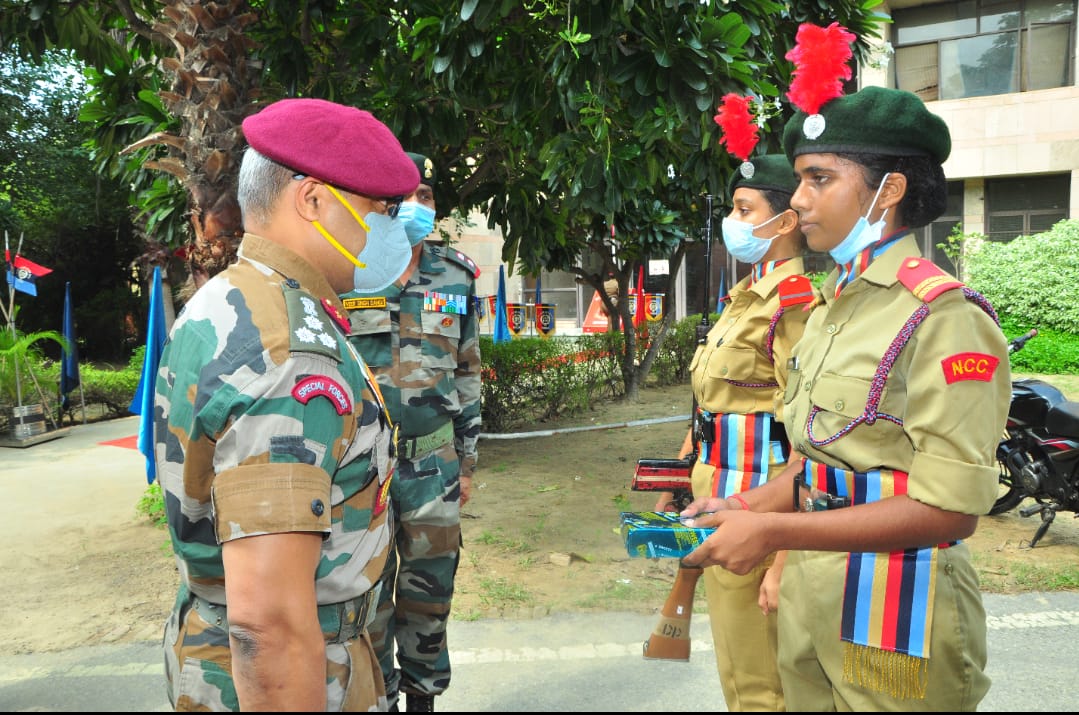 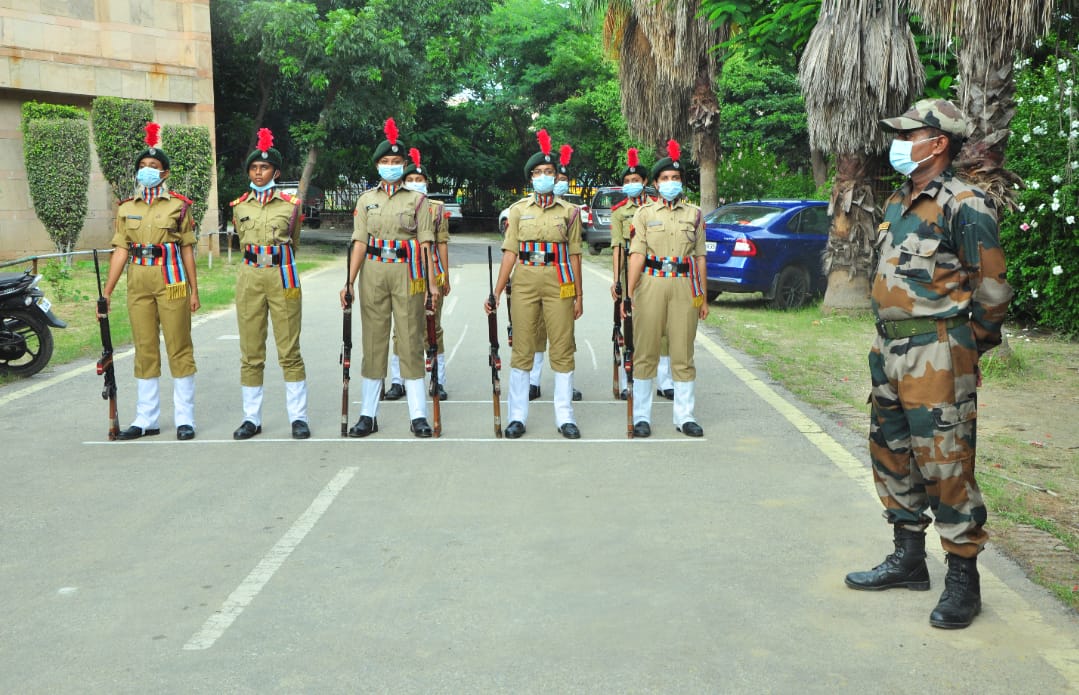